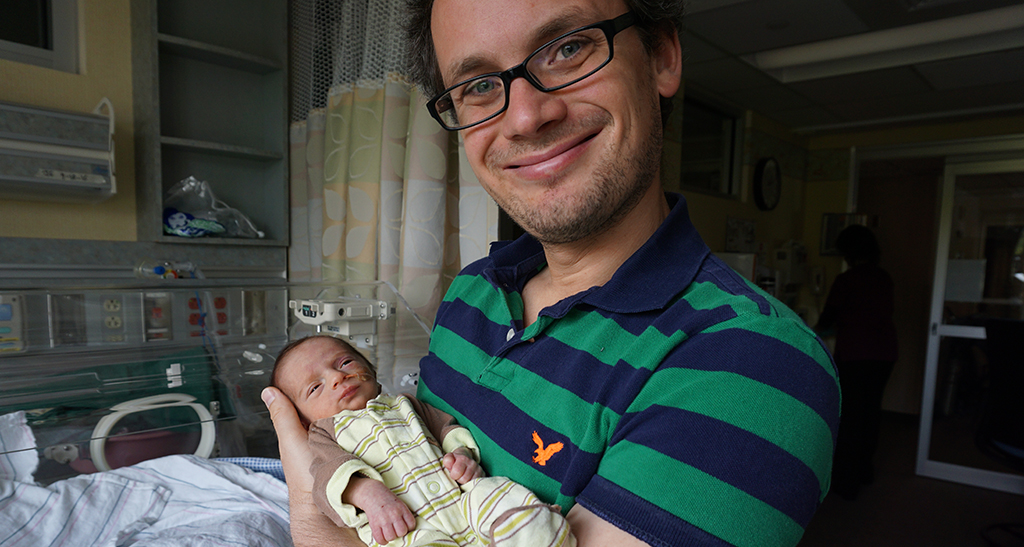 Posted at 14:06h in Our Families by RMHC

Our story began as a vacation and ended up with the early birth of our son, Emil. We are from Mannheim, Germany and came to the United States for a vacation combined with my husband’s business trip. We took this opportunity to travel a lot, beginning in Portland, heading to the North Cascade National Park and Whistler, and arrived finally in Boise, from where we traveled to McCall and the wonderful Yellowstone National Park. I was 33 years old at the time. I had an extremely healthy pregnancy (no pain, no cravings and no vomiting). That´s why I continued with sports – even trail running, mountain biking and road biking. I had plenty of time while my husband was working, so I did more sports in the U.S. than before and also added yoga to relax. Our diet was balanced with lots of vegetables and fruits.

On our last day in Boise, September 17th, we bid farewell to Boise at the Foothills while the sun was setting. It was a really magical moment and we said to the baby “unfortunately you don´t get to see this beauty, but we will definitely come back”. Then we went back to our room and watched a pregnancy class which we had planned all along.

Everything was packed and in the car so we could start early in the morning to arrive in Seattle where our plane was to leave the next day. That night I felt some contractions and thought: “I am at 34 weeks and that must be the Braxton Hicks contractions”. But it got stronger and stronger, so I woke up my husband Moritz. We tried to reach
our midwife in Germany without success. Moritz noted down the contraction intervals, they kept getting smaller.

Then I went in the bathtub, which should help when you have Braxton Hicks contractions, but it didn´t. So we decided to go to the hospital to assure that everything is okay. We arrived at St. Luke’s around 6:30 AM. They figured out that I had the symptoms for pre-eclampsia, a medical situation that endangered both lives. They told us at
9:30 AM the baby would come that day and that it would happen before noon. We were shocked and afraid that the baby would have some damages because he was 6 weeks early, but the doctors settled us down and said the baby was ready.

At 11:47 AM, Emil was born with help of forceps at only 3 lbs 6 oz, on the low side, even for a 34 weeker. But he had no disease or infections. Even the examination of the placenta didn’t show anything, so we didn´t know the reason for pre-eclampsia.  He got the CPAP for just 8 hours because he was strong enough.

At the NICU, where he spent a total of 20 days, they took very good care of him. The first 13 days we were there nearly 24 hours because they let us stay in the rooming-in rooms. We could go there whenever we wanted and that was also good for our nursing workshop. Emil couldn’t suck like babies born at term, so he got the tube with my milk and I tried to nurse him. Later the bottle replaced the tube and in Germany after he was one month we were able to go to breast feeding 100%. The doctors, midwifes, respiratory specialists, nurses, lactation specialists, patient and
financial coordinators and social workers, did a great job with the birth, the care, and also to make us feel good, so many miles away from home.

After 13 days we moved to the Idaho Ronald McDonald House with the help of the social worker and the patient care coordinator. We directly felt like home with the amazing staff and all the help. They even had so much delicious food; I still think about it – especially the  ookies which smelled so good every time we came to the House. When your baby is at the NICU and you have to pump and sterilize every three hours, nurse the baby, and want to spend hours in kangaroo hold, you don’t have time to organize an accommodation or prepare food. The House was so close to the hospital that we could be there in about 8 minutes. Thanks to the Idaho RMH we were able to concentrate on the most important thing – our baby.

It was so helpful in such unlucky circumstances to have this great support where you not only have a roof over your head but you can talk with the staff and other families in a similar situation, which really helps to overcome the doubts and fears. And it was soothing to know that we could stay as long as it was required for the baby to stay at the NICU or even after discharge to see the doctors for the follow up. And we were so glad that we could stay there till we were able to fly back to Germany and not have to worry about finding new accommodations.

Now we think it was blessing in disguise to be at the NICU at St. Luke’s and stay at the Idaho Ronald McDonald House. Especially because the three of us had the most intense time together and the help of wonderful people in the City of Trees. It was amazing how much strength Emil gave us – even from the beginning. We didn´t doubt for a second that he was going to be healthy.

After we said farewell to the staff at RMHC, we left Boise October 15th, to return to Germany. It was nice to finally come home but we still miss Boise and the Idaho RMH very often. Emil is steadily gaining weight and doing well. He makes us all very, very proud and happy.

Thank you to the Idaho RMH staff, volunteers and donors for this House.